Of all of the films that I’ve screened for my Horror-on-Sea coverage (for both AoaS and B*StoleMyRemote), Charismata is the one that I’ve spent the most time processing (Check out the trailer here)

Not unlike the provocative imagery that haunts Rebecca throughout the film, my thoughts seem to frequently return to Andy Collier and Toor Mian’s psychological thriller. I’ve actually been hesitant to sit down and write this review because it would mean trying to capture my feelings in some kind of logical/linear fashion.

All of this to say that I totally loved Charismata. It’s my favourite film being screened at the festival and I think it has huge potential if it is ever picked up for distribution and made available to horror fans. (Sidebar: what’s the hold-up? Why hasn’t this eminently marketable film been scooped up?)

Part of the reason that Charismata resonates so strongly with me is because it presents as a familiar, albeit well-executed, story and then reveals itself to be much more. What begins as a straightforward investigation into a series of brutal murders with links to the occult begins to take on a nightmarish personal dimension for Rebecca (Sarah Beck Mather), who begins experiencing vivid hallucinations that completely derail her personal and professional life. 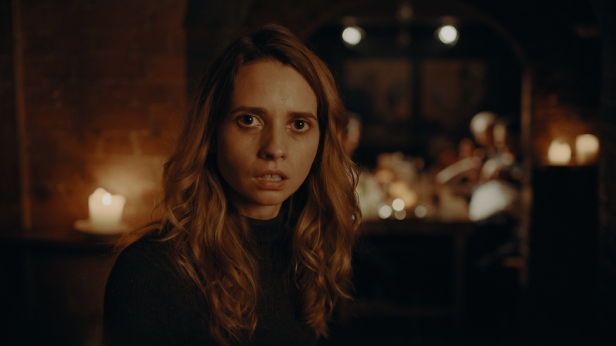 The first – and main – reason that Charismata works is lead Sarah Beck Mather. The part of Rebecca demands that Beck Mather be simultaneously tough and vulnerable, inquisitive and stubborn, bitchy and threatened. Collier and Mian’s script immediately introduces conflict into Rebecca’s work environment in the form of toxic masculinity: her more experienced male partner DC Rice (Sean Knopp) is a dick and he treats Rebecca (and all other women) dismissively and with contempt.

Our introduction to their partnership is him chastising her for being sick at the last murder scene, a fact that he and the coroners openly mock her for. Her open denial of the fact is played for laughs when she once again vomits, but the underlying message about how difficult it is for a young, attractive woman working as an investigator to be taken seriously remains. This issue is repeatedly underlined in all of her professional interactions with colleagues, save her no-nonsense boss. Despite the fact that they vary from arrogant to completely inept, it is Rebecca whose authority and contributions are continually dismissed.

This gender division is an instrumental part of the film. Not only does Rebecca struggle to be taken seriously at work, her abilities are regularly framed by and put in context with her father, a highly decorated member of the force. Her desire to prove herself – as a woman, as a police officer in her own right – is further challenged when she begins suffering from hallucinatory dreams, waking visions and an unhealthy fixation on the case’s prime suspect, Mr. Sweet (Jamie Satterthwaite).

Sweet is Charismata‘s equivalent to a femme fatale. He’s the dangerous, seductive, likely murderer that Rebecca finds herself fixating on. Satterthwaite plays the part to perfection. It doesn’t hurt that he and Beck Mather have great chemistry, so when Sweet begins appearing in Rebecca’s dreams in increasingly sexualized ways, it works. This introduces a nice tension and ambiguity to their (real) interactions: Rebecca has a reluctant attraction to Sweet but it is clear that she doesn’t trust him. Their scenes together pop.

The turn from police procedural to hallucinatory noir is less of a pivot and more of a gradual transition. Once Rebecca becomes more dogged in her pursuit of Sweet, at the expense of her career and possibly her sanity, Charismata really picks up steam. The film steadily becomes less grounded in reality and the increasingly hallucinatory visuals prompt us to question what is real and what is imagined. This aligns well with the film’s treatment of gender and power issues, as the men in her life believe that she’s unable to cope with the demands of the job and essentially dismiss her as a hysterical female (In short: Rebecca is put through the emotional wringer).

The intensity of Beck Mather’s performance is immensely watchable, even though the case itself becomes less engaging as the film progresses. Everything comes together in the climax, though the narrative explanation is a touch disappointing; the visual and performative aspects of Rebecca’s descent into madness are far more interesting than the film’s reveal. A deliberately confronting finale will likely generate buzz, though perhaps not in the way that the filmmakers hope for. I didn’t mind it, but I can imagine a lot of disgruntled audience members leaving with a bad taste in their mouths.

The Bottom Line: The warts-and-all exploration of Rebecca’s psyche and the narrative’s investigation of gender politics really help to distinguish Charismata from traditional crime thrillers. Beck Mather’s performance is revelatory and her sexually charged chemistry with Satterthwaite ensures that the film successfully negotiates its second half tonal changes, though a potential problematic ending may dissatisfy audiences. Regardless of the minor quibbles, Charismata is fascinating and well worth seeking out (should it ever become available!)

Charismata plays at Horror-on-Sea on Friday, Jan 26. For more of my coverage of the festival, visit Bitchstolemyremote.com.