In Cooper S. Beckett’s supernatural horror-mystery Osgood As Gone, paranormal podcaster Prudence Osgood (Osgood to her friends, The Spectral Inspector to her fans) is haunted by far more than just the ghosts she investigates. Semi-retired and desperately placating her personal demons with a potent mixture of bourbon, painkillers, and sex, Osgood finds herself drawn back into the business of solving mysteries when she receives a cryptic email from an anonymous source. Assisted by technological wunderkind Zack Nguyen and her ghost-hunting ex-partner Audrey Frost, Osgood finds herself embroiled in an intricate plotline that calls to mind the best aspects of The Girl With the Dragon Tattoo, True Detective, House of Leaves, and Eldritch horrors. Beckett’s engaging narrative weaves together eerie pop cultural references and Fortean conundrums as disparate as JenniCam, Elisa Lam, and the Dyatlov Pass into a compelling and complex mystery that all but forbids you to set the book down.

In Prudence Osgood, Beckett has created a new queer icon. Articulate (unless it involves her own emotions) and fearless (except when dealing with her own past trauma), Osgood is a nuanced, complicated, and utterly relatable collection of vulnerabilities masked by a standoffishness that is less performative than it is instinctive.

The mere existence of an ethically non-monogamous character in film or literature is a breath of fresh air, and Osgood’s (and Beckett’s) nonchalant refusal to explain or excuse her romantic choices or her queerness offers a tantalizing glimpse into a post-heteronormative future where such unapologetic representations are par for the course. Beckett was kind enough to chat with me about the draw of the supernatural, Osgood’s origins, and the growing acceptance of alternative lifestyles.

Thanks for taking the time to speak to me. Osgood As Gone’s central mystery weaves together so many urban legends. Was the plot borne of an already-existing interest in these modern enigmas, or did you have to do a lot of research?

This story (though not in its current form) has been percolating with me since high school and the beginning of college (over two decades) and was born from an obsession with urban legends (read all the books and was an avid Snopes fan) and the bizarreness of the Beatles’ Paul is Dead hoax. Where a lot of people can blow off some of the sillier ideas of both of these, I found something profoundly unsettling in them and spent over twenty years trying to find the right vehicle for this story.

Osgood is such a unique and fully-realized character with an incredibly rich backstory. How long were you living with this character in your mind before writing Osgood as Gone?

Osgood is new to this story. As I mentioned, I’ve tried various versions throughout the years, most recently one with a caddish male anti-hero ala Gregory McDonald’s Fletch. In the intervening years, I realized that I just didn’t care what this cis, hetero guy had to say anymore, and wondered what would happen if I slid his issues over to a female lead. Osgood came out nearly fully-formed from that, though I found it far easier to access backstory for her asshole-ness.

I think you made the right decision, she’s a fascinating protagonist. As a non-monogamous, queer, scare-loving podcaster yourself, how much do you identify with Osgood?

In all my fiction, I tend to fracture my psyche and give my worst, most hated, most shameful traits to my characters to deal with (read into that what you will.)  Osgood is, in many ways, the most ME character I’ve ever created. Processing regret, processing chronic pain, dealing with conflict altogether poorly. Pushing away those around me. Yeah, I gave Osgood MOST of my pain and issues, and she’s a better character for it. Thankfully, though, I’m not an opioid addict or drunk.

It’s so rare to see polyamory addressed in fiction, especially in such a non-judgmental and matter-of-fact manner. When you write queer and non-monogamous characters, I assume that your primary intended audience is queer and polyamorous readers who are hungry for high-quality representation, but do you also write with the intention of educating heteronormative readers and reducing stigma?

It’s not so much about educating the hets, but more about putting words/phrases/ideas in front of them and normalizing it a bit. But that all is majorly dwarfed by the desire to put characters in front of the marginalized misfits and losers (thanks, Hedwig) who look like them. While it’s easy to find GAY MALE FICTION and LESBIAN FICTION, those of us who identify in the grey areas don’t usually find representation in media unless it’s to hang a big sign of inclusivity on us (and probably kill us off or make us a serial killer). I set out to include things like queer/pansexual, and non-monogamy the same way previous relationships and attraction are dealt with in straight media. It’s not essential to the plot, it’s just THERE.

With the younger generation generally skewing in favour of more progressive values and greater acceptance of gender variance and queerness, do you think that polyamory is also starting to become less eyebrow-raising?

It’s not specifically polyamory, I don’t think. It’s a general idea of not-traditional-monogamy. The younger generation simply ISN’T committing to monogamy or sexuality the same way others including mine did, and that’s creating a brand new fluid view of both. It’s at once incredibly refreshing, and makes me feel old. 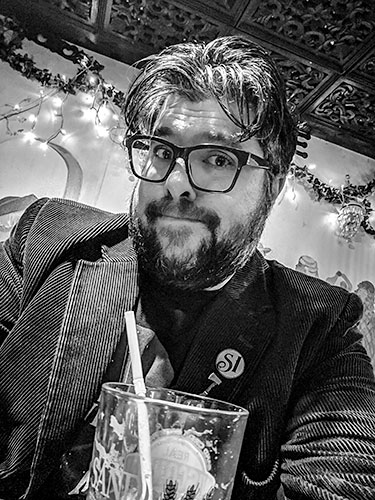 You wear a lot of your influences firmly on your sleeve (there is a particular Stephen King reference in a later chapter that made me gasp with joy). Apart from King and Lovecraft, who would you say has influenced your work over the span of your writing career?

I’ve been a horror fan since a young age, and read my first King in 6th grade when my mother (foolishly thinking there was no way I’d read a 1200 page novel [and having NO IDEA of the content]) told me I couldn’t watch the IT miniseries until I read the book. I stampeded through that, being the only sixth-grader whose bag was weighed down by such a massive tome. Before that, though, I was obsessed with the Point Horror novels by R.L. Stine (pre-Goosebumps), Richie Tankersley Cusick, Caroline B. Cooney, and Christopher Pike. And as I moved into junior high, I realized that Pike was doing something different in his non-point books (the ones that are lovingly aped by my cover), he had real stakes, real violence, real death, and well, there was sex. Not the pan to the curtains blowing kind of sex in Point. Pike was the transition. I probably wasn’t ready for IT when I read it, and Pike helped my horror sensibilities evolve until I could handle Clive Barker and the true horrors of King’s work. Dean Koontz and John Saul were in there sometimes, but both felt like also-rans.

Much of my horror education and love came from film. As a kid, I had terrible nightmares whenever I’d see anything remotely scary, so my parents had very strict rules on what I could and couldn’t watch. I wasn’t even allowed to watch Ghostbusters until my younger brother watched it at a sleepover. But we all know what deprivation leads to: yearning, desire, obsession. I would squat in the magazine aisle of the Osco in Chicago to read Fangoria, I’d scour the VHS box art (which was so much better then) and I’d sneak into my parents’ room after I was supposed to be asleep to watch Halloween II on the late-nite WGN movie.

What I love most about horror as a genre in print, film, or television, though, is that it can contain multitudes. Within horror, you can have comedy, sci-fi, romance – every other genre. You can’t just randomly have a monster eat the love interest in a comedy unless that IS the plot, but you can have laugh-out-loud humor in horror. I have tremendous affection for horror, and think that it’s only as terrible as it’s supposed to be when the people making it don’t respect it. With proper respect, horror can give us the catharsis we so desperately need.

Totally agree. Last question: I was so happy to reach the end of the book and see that it was set up for a sequel. Do you have plans for more than two books in the series? Will the Spectral Inspector return for more adventures?

I’ve always wanted my own Buffy-like TV series. I love continuing adventures that aren’t specifically SEQUELS. And the pulpy origins of this character from Fletch (ignore the movie, there are ELEVEN books) to Philip Marlowe, practically insist on a series. I’m also a sucker for a cliffhanger.

As the end of the book says (probably undercutting my cliffhanger a touch) Osgood will return. My hope is she’ll return by the end of this year. I’m already working on Book II and have a rough plot idea for a third. Once I tell this trilogy, I’ll be able to make it more serialized and less sequelized. Let’s just say I know I have a lot to answer for from the first book.

Great! I look forward to reading the next instalment!

Osgood As Gone can be purchased on Amazon.

One thought on “Polyamory Meets The Paranormal: Interview With Author Cooper S. Beckett”