These body fluids, this defilement, this shit are what life withstands, hardly and with difficulty, on the part of death. There, I am at the border of my condition as a living being. My body extricates itself, as being alive, from that border. Such wastes drop so that I might live, until, from loss to loss, nothing remains in me and my entire body falls beyond the limit… (Kristeva 1982, 3)

Julia Kristeva’s essay on abjection, Powers of Horror, certainly seems to speak true in the dead of summer, as we try to withstand the rising temperatures and oppressive humidity. Her writing points again and again to the uncomfortableness of things that disgust and repel us: sweat, vomit, piss, blood, puss, and so forth. She goes on to dissect the greater meaning that these elements signal — a crossing of borders, of established order. Obviously, the horror genre is no stranger to the subversion of order. At their core, horror films portray precisely that which “disturbs identity, system, order. What does not respect borders, positions, rules.” (4)

And, in hot weather such as this, we may resemble the very border-thrashing creatures we see in horror films: moist, disheveled, maybe a little foul-smelling, perhaps short-tempered and ready to lash out if anyone dares to make physical contact, civility and niceties be damned. Some of us avoid direct sunlight if forced to venture outside, seeking out shade projected by towering buildings or leafy, wooded areas. Others hide out in dark interiors, and in the absence of air conditioning, cool basement spaces are coveted. The scraps of light material that we manage to drape over ourselves quickly erode into damp matted masses of water stains, deodorant rings, and stray drops of cool beverages we chug to quench our undying thirsts. We try not to move, to exert any energy, because to do so is to encourage fresh trickles of sweat to trace their way down from various body creases and pool amidst our bloated folds. At its worst, this heat can even induce stomach-turning results as bodies reject their insides in protest.

All I’m saying is that it’s not entirely strange to identify at least in part with those putrefying beings in any of our favourite creature, alien, or zombie movies. So, as you wait for this hot weather to pass (and if you’re not feeling uncomfortable and clammy enough as it is), seek out one of these truly disgusting distractions (and of course, there’s plenty more where these come from).

Sam Raimi’s love of practical effects deserves our appreciation and everyone’s favourite cabin-in-the-woods tale features tons of it. As Ash and his group of friends settle in during a getaway to the famous ramshackle cottage, they uncover the ghastly Necronomicon and what spews forth is all kinds of messy evil: rotting flesh and open sores, to gushing gore and explosive streams of vomit. For that matter, each installment in the Evil Dead realm (including its offshoots, remakes, and reboot in TV form) has volumes of bodily fluids to contribute to the mix, so take your pick!

It’s hard to forget the revolting mutations in this John Carpenter film. When a crew of researchers in the Antarctic encounter a parasitic creature that can assume the form of other living beings, tensions and trust levels among their group quickly escalate. They agree to attempt a blood test to determine whose skin suit the creature is residing in, and things get… a little slick and slimy. Okay, that’s an understatement: there’s definitely plenty of body-splitting, skin slippage, gore splatters, and stringy mucous to go around, much to the crew’s terror. When the creature can’t take the heat, it tears its human disguise apart. Funny how the phrase “kill it with fire” is especially at home in this hot weather…

David Cronenberg is a champion of body horror, so it’s crucial to incorporate something from his oeuvre, hence this horrifying, yet mesmerizing flick. In his efforts to explore teleportation, scientist Seth Brundle’s experiment goes terribly awry, bringing about a strange transformation of gooey proportions. At first, the effects take hold bit by bit with the appearance of rash-like pustules and nail-shedding bodily decay. But how about that final sequence? If the heat doesn’t put you off your lunch, this very well might. 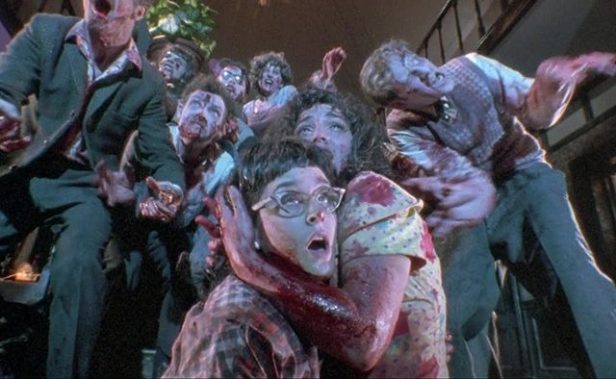 We’d be amiss not to include Peter Jackson’s early cult horror-comedy. After Lionel’s overbearing mother is attacked and infected by a deadly creature (of all bizarre things, a loosed Sumatran rat-monkey hybrid), he does his best to tend to her increasingly decaying state. However, her death and ensuing reanimation threaten to spread a zombie plague. The film hints at what’s to come with this treat of a dinner scene.

Let’s not give all the credit to the skin-crawling special effects of earlier decades – films like James Gunn’s directorial debut deserve some attention, too. A meteorite carrying an alien parasite crash lands in a small town and absorbs into the identity of Grant, a local brute. As the creature takes control of its new human suit, it tries to hide its oozing, tentacle-waving monstrousness from Grant’s belittled wife and the increasingly suspicious police and town-folk. Behold, the creature in its nasty glory.

One thought on “Heat Waves Make Creatures of Us All”