GUEST CONTRIBUTOR: Brant Lewis is a writer, movie fan, and filmmaker who loves the horror genre. Their favourites include The Devil’s Backbone, The Innocents, The Lighthouse, and Scream 2. You can follow them on Twitter @Brant__Lewis or visit their website at brantlewis.com.

Film is one of the few mediums where the viewer becomes a participant with the piece. The viewer must take an active role in understanding how the film operates as a whole on a technical and conceptual level while watching it. Film forces the audience to view a specific movie through a particular lens and to interpret what the meaning is. The stereotypical Rorschach test of cinema is Kubrick’s The Shining (1980). I believe there is a better choice to display the power of ambiguity in the film; Jack Clayton’s The Innocents (1961). Clayton’s work derives from the play of the same name, which primarily draws from Henry James’s The Turn of the Screw. James’s novella serves as a prime example of how ambiguity can add to the horror of work. As a result, Clayton manages to replicate the nature of uncertainty and translate it into the film. 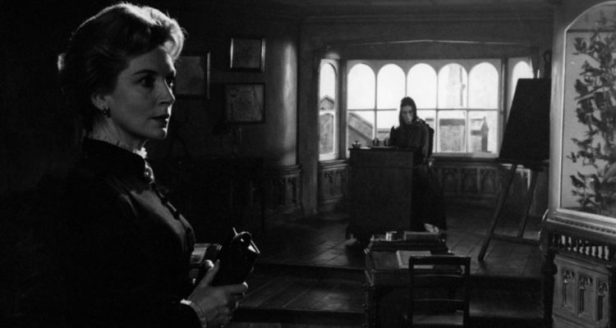 The movie follows Miss Giddens (Deborah Kerr), a governess at Bly Manor who believes that the two children are possessed by the spirits of the two recently deceased employees. The film neither confirms nor denies the haunting of the children or if the paranormal experiences truly happened. Truman Capote’s script forces the audience to confront where ghosts end and where the mind’s imagination begins. In one of the most famous sequences of the film, Flora, the youngest child (portrayed by Pamela Franklin), plays near the lake while Miss Giddens watches. However, a mysterious song begins to sing, and Flora enters a trance. When Miss Giddens asks what is wrong, she looks up and sees the ghost of previous governess Miss Jessel (Clytie Jessop) on a small island in the water. Spirits have a habit of showing up around the children. Are the children channelling the ghosts, or is it only in the mind of the governess? Flora refuses to acknowledge Miss Jessel’s spirit in a later scene as Miss Giddens begs her to admit to it. The ghastly face of deceased valet Peter Quint (Peter Wyngarde) appears in the window of a balcony, and a ghostly shape appears out of view on the top of the tower. The answer about the ghosts does not become clearer but becomes much darker and more complex the deeper Miss Giddens investigates it.

Secrets play an important role in the film. The kids speak in hushed tones and choose not to reveal what they say to Miss Giddens and housekeeper Miss Grose (Megs Jenkins). As Miss Giddens says, there is “too much whispering.” When it comes to the whispers of the children, Miss Giddens must decipher what they say on her own. The audience is in the same position as the governess since we never hear what the children say among themselves; we are in a similar mindset as Miss Giddens. Even the reason why Miles (Martin Stephens) was expelled from school is never fully revealed until the end. Although Miles explains it was due to violence and language, there is still a more profound horror. Since we do not know the extent of his actions or words, we must assume them to be truly vile and violent. The viewer’s mind, much like Miss Giddens, has to assume the worst.

Miss Giddens believes she must save the children from the ghosts at any costs. As previously mentioned, she presumes the only way to exorcise the children is to have them admit the hauntings and their relationships with Miss Jessel and Peter Quint. The dark secrets must come to light and release the children from their chains. Both Miles and Flora refuse to confess what is going on, adding fuel to the governess’s beliefs. She can only assume the worst before sending off Flora and Miss Grose, leaving her alone with Miles. At the end of the film, Miles engages in hysterics as the supposed ghost of Quint watches in the garden. Miss Giddens begs Miles to say Quint’s name. Miles barely has the power to say it, and then dies in the governess’s arms. By acknowledging Quint, both Miles and Miss Giddens are relieved of the haunting. Yet, it is hard to ignore the tragic death of Miles. The only way he can be free is by dying. Or, the haunting of Miss Giddens is gone since the totem has been destroyed. There are no definite answers at the end; only loose ends, the audience must decide on what the meaning is.

The question arises how we, as the audience, are meant to interpret the ambiguous nature of the hauntings. Are there actual ghosts? Is it a cruel prank by the kids? What do the spirits have on the kids? Are the events a result of Miss Gidden’s own repression? Rather than giving us a direct answer, Clayton focuses on how the events can exist by the spirits or result from the governess’s imagination. By not providing a substantial solution, the ambiguity drives the film’s emotion and how one can interpret it. That is the most beautiful aspect of this work. The point of the film is not demonstrating that one character is right or wrong. Instead, it is more about how the subjectivity of the viewer can force one to become invested in this film. There is nothing darker than not knowing what lies beyond the abyss and being forced to create our understanding of what occurred. All you have to do is be willing to take the plunge into darkness.