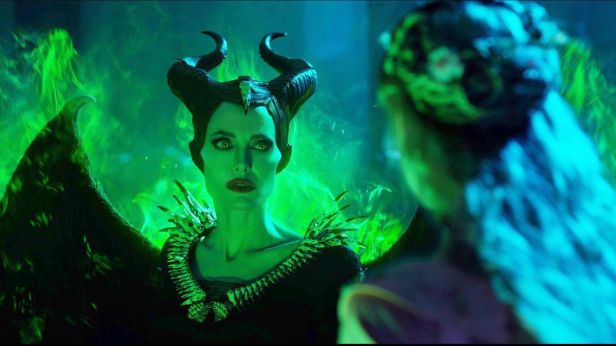 Back in 2014, Angelina Jolie debuted her otherworldly sharp and pointed cheekbones and horns in Disney’s live action Maleficent. The film purported to tell the unknown history of the erstwhile villain from Sleeping Beauty and justified its own existence by ringing up $241M in North America & ~$760 M worldwide, and also reconfiguring the familiar fairytale as a feminist critique of patriarchal masculinity.

Cut to five years later, and the debut of Maleficent: Mistress of Evil. In the world of the film, five years have also passed, Aurora (Elle Fanning) is the beloved Queen of the Moors (and all of its fairy folk inhabitants) and she’s still dating moderately handsome/completely boring Prince Phillip (Harris Dickinson, taking over from Brenton Thwaites). Trouble brews when Phillip asks for Aurora’s hand in marriage, which prompts Aurora and her godmother Maleficent to meet with Phillip’s parents: kindly, peace-loving King John (Robert Lindsay) and Queen Ingrith (Michelle Pfeiffer), who is, shall we say, considerably cooler on the upcoming nuptials.

There’s very little mystery where the conflict in the film is coming from. Screenwriters Linda Woolverton, Noah Harpster, and Micah Fitzerman-Blue make no effort to hide the fact that Queen Ingrith is plotting the downfall of Maleficent and, by extension, all of the Moor. In fact, the film’s condensed timeline means that the entire film takes place over only four days, which makes Ingrith’s wrath initially feel quite accelerated.

Neither maternal figure is particularly excited about meeting the other at a celebratory dinner for the young lovers and in no time, the conversation quickly becomes political and heated. Faeries have been disappearing from the forest and a pair of humans have been killed in the pre-title sequence, confirming that relations between the species remains tense. When the King winds up cursed by the end of the dinner, the spark between the two women threatens to escalate into all out war between the Fae and the Humans.

The scope of the film is slightly larger this time around as less time is spent unpacking the Fae creatures of the Moor. Instead Maleficent: Mistress of Evil introduces an integral new cast of characters that dominate the proceedings during the film’s slightly saggy middle section. This includes Chiwetel Ejiofor’s Conall, another peace activist, and Ed Skrein’s Diaval, a warrior who longs for vengeance against the humans. This narrative detour has the inevitable consequence of drawing Jolie and Pfeiffer apart for a lengthy period, though it does provide director Joachim Rønning and his creative team some of their best visual material, including a set that resembles a giant bird’s nest and an island that encompasses every kind of habitat.

Hidden amidst the conflict between the species is the same foregrounding of a theme from the first film, namely the natural vs the mechanical. Queen Ingrith employs a cellar-dwelling dwarf (Warwick Davis) as a chemist who is weaponizing the Fae’s ecosystem and when the war crescendos, she uses modern warfare tactics such as catapults and balloons. Contrast this with Maleficent and the other Fae, who use tree roots in battle and are naturally associated with flora and fauna, so much so that when they die (Viewers with young children beware: there are deaths in this film), they regress to inanimate foliage.

Ultimately this is a fairytale story intended for teen girls and family audiences and, in that capacity, Maleficent: Mistress of Evil delivers on expectations. The colour palette is bright and vibrant, the FX work is mostly solid (the flying looks good; the fairy godmothers continue to look uncanny and mildly terrifying) and the costuming, particularly the gowns and the jewelry, is exceptional and appropriately regal. At times the attempts at humor, including the use of a CGI porcupine and toadstool as sidekicks, come across a little too childish, particularly in contrast with the climax’s startlingly mature content. Finally, given the inclusive strides in casting POC in many of the supporting roles, the 100% heterosexual partnering up in the denouement feels a touch antiquated and mildly disappointing.

Jolie is once again a stand-out in the role and the continued focus on the mother/daughter relationship is worth celebrating, even if the narrative is a touch more generic this go around. A little tightening in the edit of the saggy middle section would have lifted the film, and it is hard not to feel that there’s a missed opportunity in the creative team’s decision to keep Pfeiffer and Jolie apart for so long (considering that their conflict is the film’s main selling feature).

Still, despite a mildly predictable outcome, the bombastic final battle, which is carried out over the skies of the realm, is visually sensational. Bonus points for *SPOILERS* dispatching a particularly hissable hench woman in entertaining fashion *END SPOILERS*.

The Bottom Line: Despite the five years between films, Maleficent: Mistress of Evil is a worthy sequel that should appease fans of the first film, particularly its core teen female demograph.