As the border between reality and horrific speculative fiction grows ever more permeable with each news cycle, Gigi Saul Guerrero’s Culture Shock (2019) looks to current headlines for its ghastly inspiration.

The film, which screened at the Fantasia Film Festival on July 25th, is the tenth instalment of Into the Dark, a monthly horror anthology series produced by Blumhouse and inspired by holidays. Culture Shock‘s Independence Day setting is the perfect fit for its dark and incisive reimagining of the country’s all-too-real border crisis. 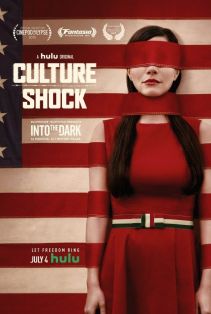 Marisol (Martha Higareda) dreams of leaving her home in Mexico for the chance to find a better life in America for herself and her unborn child. Determined to cross the border, she tracks down the coyote (Sal Lopez) who’d left her behind on a previous attempt and convinces him to take her with him on his next trip. She’s joined by Ricky (Ian Inigo) a young Guatemalan boy travelling alone, and Santo (Richard Cabral), a mysterious man with many tattoos and even more dark secrets. An unlucky encounter with the Cartel in the desert leads to the group being confronted by the U.S. Border Patrol.

This is where things take a turn.

Marisol wakes up the next morning no longer pregnant, in a pastel-painted bedroom in a surreally tranquil American town, unable to remember the rest of her crossing—a situation shared by Ricky and Santo. Her hostess Betty (Barbara Crampton) and her neighbours are friendly and welcoming, her new baby is well-behaved and adorable, and the neighbourhood is the perfect picture of small-town patriotism … yet something insidious seems to be lurking just beneath the surface. As the town’s much-anticipated 4th of July celebrations grow ever closer, Marisol struggles to discover the town’s true purpose—and how she and her fellow travellers can escape this American nightmare.

Gigi Saul Guerrero is known for her gritty, visually striking approach to horror and takes full advantage of the opportunity to create multiple distinct and wildly different settings in the film, with meticulous attention paid to the smallest details of set design and styling. Although her July schedule was impossibly busy with both San Diego Comic-Con and Fantasia 2019, she was gracious enough to speak to me about Culture Shock, authenticity, and the films she is most looking forward to seeing this year.

Congratulations on your first feature! The last time we spoke you were writing a game for Capcom and had just finished filming your series La Quinceañera for Stage 13. It’s been an exciting couple of years for you! How did you become a part of this project?

It’s such an amazing story! A totally ‘right time, right place’ kind of situation! Around this time last year, I signed with my agent at VERVE in L.A.  They felt I was more than ready to do general meetings in town at studios. I was excited, and it so happened that Blumhouse is my first stop—my first meeting! Within the conversation of getting to know them and them getting to know me, they brought up their new monthly series Into the Dark, where every episode is a feature-length film that has to do with that month’s holiday. And they were starting to look for a director to do their 4th of July episode … and well … the moment they said it’s a Mexican story… I freaked out and said, “YOU NEED TO WATCH MY SHORT FILM EL GIGANTE!”

They watched it, they called back and the rest is history! Haha, a match made in Hell.

It was like fate! Culture Shock is such a timely, ripped-from-the-headlines film with a strong message. What were your biggest storytelling goals and what do you want audiences to take from it?

The biggest challenge was to make something that speaks a horrifying truth of our border crisis and to make sure people would want to sit through an entire film speaking to that. I find what we see in the news every day is already hard enough to bear and take in. Culture Shock was important to tell a story that people could sit and enjoy and let go the horrors of our world, and something that not only immigrants from Latin America would understand but that every kind of person could relate to.

I think you nailed it. The script was co-written with James Benson and Efrén Hernández. What elements did you bring to the script? Were there certain things that you felt it was important to include?

Being a Mexican immigrant woman myself, I brought the levels of authenticity and sensibilities needed for the script to feel raw and real from our main character’s point of view. My traditions, language, and culture really shine in the film and I wanted to give Mexican audiences a film that hits home.

Hahaha, not to mention Gigi-style GORE & GRITTY HORROR was added to it, of course!

The gore is used so sparingly and judiciously that it’s incredibly impactful when it shows up! Telling this kind of story is so important, especially in our current era of amplified hatred and fearmongering. Was it challenging to tell this story the way that you wanted to tell it? Did you get pushback on any story elements?

I felt it was not worth it to hold back. I find films like Get Out to be so successful in their storytelling and message because they are not afraid to cross that line of reality. Even though Jordan Peele came from a place of possibly anger and frustration to tell his story, I was with him completely and understood his voice.

As for Culture Shock, when I first tackled this script, I felt it was my responsibility to be real on the situation of the border and the lives of these immigrants who at the end of the day want the same thing we all do: a fair chance in life. 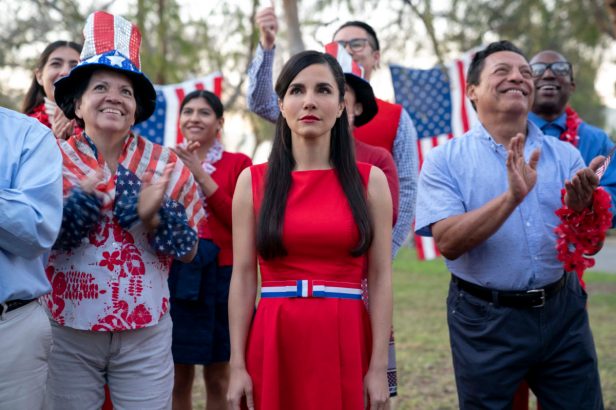 Culture Shock is the type of horror film that wields paranoia as a powerful weapon; watching it definitely calls to mind aspects of Rosemary’s Baby, The Stepford Wives, Get Out, and The Matrix. Were there any other films that inspired you during the production process?

Hahaha, you basically named them! But, also, I wanted to almost feel what it would be like to live in a ‘Pleasantville gone wrong’ kind of setting. I find post-war we have been advertised this illusion of the perfect world, the perfect and desired American Dream, by propaganda posters. They looked so so perfect, painted in pastels. When you look at them… what can go wrong? That’s what I wanted it to feel and look like.

I started watching all of Wes Anderson’s films… I never really cared too much for his films until I had to make Culture Shock. Damn… he is incredible! I loved the symmetry and perfect composition he has in his shots and visual style. I was excited to try something new.

Once we went to color, we used so many films, but I was excited to look back at my all-time-fave film Children of Men. It’s so raw, brutal and gritty. I was so inspired by the color from that film.

I’m also an Anderson fan. But onto something you wouldn’t find in his films—the portrayal of the rape storyline in Culture Shock was powerful (and, I imagine, emotionally challenging to film for all involved). I appreciated how well it was handled, as many directors glamourize sexual violence. Do you have any tips for filmmakers who want to approach these types of scenes or stories in a more sensitive way?

That theme or subject matter, in specific—no matter how you tell it, will forever be a heavy topic to talk about. It’s sensitive and quite emotional for some people. I think it is important to consider the reality of it and not use it as another element to throw on screen but instead have a REASON to put it on screen. If you can’t answer the WHY then you are not considering or understanding what-so-ever what you’re talking about.

The film has such a great cast. Martha Higareda kills it as Marisol. What qualities were you looking for when casting that role?

It was so important to me to find the right authentic Mexican cast. When meeting the talented and beautiful Martha Higareda, we connected like sisters immediately. Instead of talking about the script and the character, we shared each other’s stories about leaving Mexico and how hard it was to adapt in a new place. Martha understood further the message of the film and the character and it was so easy to tell a new kind of border-crossing story because we all felt on set how important this was.

Every cast member who played a Mexican character is THAT much more authentic because they were themselves from Mexico working in the US, or their families were.

It was beautiful on set because I got to direct them all in Spanish and share with the crew in English what the direction was. There was truly an amazing experience of sharing both cultures on set.

Sounds amazing. How did Barbara Crampton get involved with the project?

BARBARA IS THE BEST!! I met her at Morbido Film Fest in 2017. And she came to see my screening of La Quinceañera twice. Haha, I fell in love with her.

Her character Betty was actually the hardest to cast. I was not having luck with the auditions until I remembered Barbara and I was like “She’s a bit young and hot for the role… but maybe, just maybe this could work!” So, I decided to contact her. And, yeah, her audition tape was AMAZING and I couldn’t be happier! She kills it!

Culture Shock really does seem to take place in three very different worlds. How did you approach creating strikingly different atmospheres for each setting and where did you find inspiration?

It was a blast working on creating the looks of each world with talented cinematographer Byron Werner. Both he and I knew it would be cool to step outside the box and even change the aspect ratio! How crazy, right?

The reason and inspiration for this was the intense impact I personally felt moving from Mexico to Canada. Still to this day, I can’t even begin to compare the two countries or say which one I prefer… they are just two completely different worlds. And that’s exactly the shock I wanted visually on screen.

It worked—the effect was disorienting! With social horror continually proving its popularity (and financial value) at the box office, do you think we’ll start to see more studios promoting the work of filmmakers of colour, female-identifying filmmakers, and queer filmmakers?

Yes! We are seeing more and more diversity behind and in front of the camera. However, there is still much more room for change and to continue to encourage this movement.

But I couldn’t be more excited to be a filmmaker during this recognition. The fresh new voices expressing through film are surprising us with originality and authenticity.

What were some of your favourite horror films of the last year?

Which films are you most looking forward to this year?

I seriously can not wait for Midsommar! I feel I am the only person who has yet to see it, haha! And, of course, IT Chapter 2!! AHHH!!

Oh my god, you have to see Midsommar soon. I adored it. Last question: where can we learn more about your upcoming projects?

Stay tuned with my social media @HorrorGuerrero on IG and Twitter, as well as my production company Luchagore Productions @Luchagore on IG and @LuchaGoreFilm on Twitter for amazing announcements coming SO SO SOON!