Guest contributor: Rebecca Booth (she/her) has an MA in Film Studies from the University of Southampton. She has contributed essays to printed collections such as Lost Girls: The Phantasmagorical Cinema of Jean Rollin (Spectacular Optical), Unsung Horrors (We Belong Dead), and Tonight, on a Very Special Episode: A History of When TV Sitcoms Sometimes Got Serious (BearManor Media), and is the co-editor of Scared Sacred: Idolatry, Religion and Worship in the Horror Film and Filtered Reality: The Progenitors and Evolution of Found Footage Horror (both from House of Leaves Publishing). Find her on Twitter @rebeccalbooth.

Directed by Karyn Kusama (Girlfight, The Invitation) and written by Diablo Cody (Juno) Jennifer’s Body (2009) is very much a feminist feast. In tackling the western conception of patriarchal power through plurality and demonic possession, one could even argue that it’s monstrously feminist.

Jennifer (Megan Fox) ignores warnings from her best friend Anita “Needy” Lesnicki (Amanda Seyfried) and accepts an invitation to ‘party’ with a mildly famous indie band, Low Shoulder, when they visit their small town. The band, in a ritual designed to give them success in return, subsequently sacrifice Jennifer. However, Jennifer isn’t quite dead. She returns to Needy but something is very wrong: it appears she has brought something back with her or, rather, within her. Jennifer must feed on flesh, specifically male flesh it seems, in order to sustain her body and retain her beauty and body: precisely what she uses to lure her male victims.

Jennifer returns to Needy, who reluctantly does all she can to help her friend but refuses let this murderous spree continue when Jennifer comes after Needy’s boyfriend, Chip (Johnny Simmons). Needy makes a sacrifice herself by killing Jennifer; this contact with the possessing entity, as a result of Needy’s different character and resulting choices, renders her even more powerful than Jennifer in her possessed state. The personalities of the two leading characters colour their differing experiences of possession and their fate, a telling commentary on modern societal expectations and representations of women.

Jennifer is governed by superficiality, using her looks to manipulate men to get what she wants, sexual or otherwise. At one point she grabs Needy’s breasts and states: “These are like smart bombs, you point them in the right direction and: Shit. Gets. Real.” Though she is manipulative and selfish, especially with Needy, Jennifer isn’t ruthless in her high school quest for admiration and sexual attention. When Needy questions why Jennifer lied to the lead singer of Low Shoulder, telling him that she is a virgin, Jennifer replies: “I’m not even a backdoor virgin anymore, thanks to Roman. And by the way, that hurts! I couldn’t even go to Six Flags the next day. I had to stay home and sit on a bag of peas.” Though she may have been happy to sexually experiment, and many women do enjoy anal sex, the act itself for Jennifer was singular, sustained, and painful, and pleasurable only for the male. Jennifer’s willingness to sexually please the lead singer of Low Shoulder by pretending to be a virgin suggests that she is, in fact, a naïve, self-conscious and idealistic high school girl.

Needy, on the other hand, is sensitive, intelligent, and thoughtful. She evaluates Jennifer’s behaviour and tries to advise her. Though she is clearly not as popular or powerful as Jennifer, particularly highlighted within the hierarchy of the high school, the stereotypical assertion would be to consider ‘Needy’ as her namesake, desperately wanting Jennifer’s approval and attention. Instead, the film reveals that Needy, whose nickname one can only assume came from Jennifer herself, is independent and is not swayed by others, men in particular. She doesn’t feel at all pressured to lose her virginity to her long-term boyfriend, Chip, despite his eager attempts. She also has no problem voicing her opinion; as she remonstrates to Chip, who has obvious concerns over the way that Jennifer orders Needy about, Jennifer is her best friend and she feels responsible for looking after her.

Needy is thus the first to notice Jennifer’s possession and it is no surprise that Jennifer visits Needy immediately after the ritual. Jennifer’s sacrifice, at the hands of Low Shoulder, is both her death and her becoming. Like Needy, she is transformed by her contact with the entity, but her transition is acute: her body is taken over by the demon that is unknowingly conjured by Low Shoulder. As the title of the film suggests, Jennifer’s body— which conforms to the patriarchal representation of women in order to please men—is not her own.

Possession or invasion in occult films typically involves a male personality entering the body of a young girl, especially when the invading entity is coded as a/the devil (as written about by Barbara Creed). As women are generally represented as victims in the historical horror film, the possession of a female body by an invading male entity can be read symbolically as patriarchal domination of the subordinate female. However, the fact that Jennifer only murders and devours men, using her body and feminine sexuality to entice them, may suggest that the invading entity is female.

This raises some interesting questions in regards to power and sexuality within the film. Michel Foucault understands power as plurality, in which dominant and subordinate behaviour is regarded as an effect of power as opposed to its source. Thus, while men exercise power over women in society, Foucault refutes the feminist position of oppression, in which men possess power.

Needy is an example of this critical thinking. When she kills Jennifer to stop the demon, she is infected by the demonic power and not possessed by it; somewhat similar to an inoculation, her body rejects the control of the invading entity. Additionally, the toxic symptoms of the demon—which were presented in Jennifer as a need to sustain her body by feeding on males, in turn enhancing her power, sexuality, and beauty— are not present in Needy. Instead, Needy’s body has utilised the demonic virus by mutating her cells to only embody the elements that can be used to her advantage. Needy demonstrates an increased strength and agility, though her powers may not be limited to these traits, hinting at a development in the relationship between women and their cultural representation. Needy’s biological evolution is indicative of a different material view of the female body, taking into account the real, lived experience of women instead of conforming to social-constructionist models of representation. This is why Needy survives and Jennifer doesn’t. 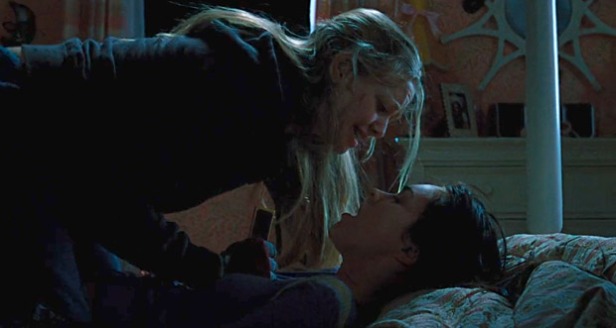 This plurality of power can be observed in the repeated ‘X’ symbol that appears throughout the film: Jennifer replies to Needy’s contestation of her plans with the manipulative line, “I’m crossing you out”; the bar in which Low Shoulder is playing stamps the symbol onto the girls’ hands to signify their entry; Jennifer refers to her regenerative power when possessed as “X-Men shit”; when Needy kills Jennifer to save both her and more potential victims, she slashes a cross into her friend’s chest and states, “Cross out Jennifer”; Needy’s cell has bars across the windows that create an ‘X’-shaped shadow across the floor at her feet at the end of the film; and Needy’s mother has a nightmare in which Needy has been crucified.

The symbol can therefore be interpreted in many ways. In addition to plurality, the symbol ‘X’ is commonly used in mathematics to signify an unknown value. The symbol could also be read scientifically, as an indicator of hybridity within biology. Particularly in regards to Needy’s mother’s nightmare, the recurring ‘X’ shape could be read an inversion of the Christian cross, and patriarchal power, which relates to a modern development in the dynamics of gendered power.

Coming back to Foucault, Needy’s plural power is thus an evolutionary feminism, unchecked, unknown, and unleashed. Needy’s escape from the prison makes it clear that physical and metaphorical walls couldn’t hold her; she was being patient and waiting for the right time to seek revenge. This is, for me, why the film is an underrated horror gem: it’s a social commentary on the constantly shifting dynamics of gendered power and equality. The ending, which reveals the carnage in Low Shoulder’s hotel room after Needy has paid the band a visit, has a clear message for patriarchy: the rules and roles are being rewritten.

2 thoughts on “[GUEST] Patriarchy, Possession and Power in Jennifer’s Body (2009)”