Warning: The following interview contains spoilers for the film.

Blue My Mind (2018) follows 15 year old Mia (Luna Wedler)’s struggle to fit in with the cool kids at her new school, while dealing with terrifying transformations to her body. Its themes of puberty, sexual exploration and need for autonomy are guided throughout the film by Mia’s unusual transformation into a mermaid. This balance between realism and fantasy creates a unique coming of age story, ripe with both queer and feminist themes.

I got to ask writer and director Lisa Brühlmann some questions about the film.*

What made you interested in creating a narrative about a women at this stage of her life, as opposed to younger or older? What do you think are the advantages and disadvantages in focusing a film on a character’s teenage years?

Puberty is a very interesting time for filmmakers, because all feelings are boosted. Everything is extreme and exaggerated. Of course, that’s very suitable for a story where so much is at stake. It is a time of departure, a time of detachment from your parents. In addition, everyone has gone through this phase and can identify with it, even if you’re older.

One of the things I found really brilliant about Blue My Mind is the balance between the normal changes and stresses of puberty and Mia’s abnormal transformation. How did you keep the mystery and tension of Mia’s transformation relevant throughout the film while still showing the everyday life of a teenager? How did you find that balance?

It was important to me to strike a balance between the fantasy and the realism. I wanted the audience not to be able to sit back. I wanted to give the impression that this story is actually happening now, that it’s real. Surprisingly all my young actors just went for it; they never even questioned it and understood this very instinctively.

Mia does a lot of sexual exploration throughout the film. There is obvious tension between her and Gianna, especially in the scene where they look like they are going to kiss outside the mall. However, nothing explicitly sexual ever happens between Mia and Gianna, unlike Mia and several guys in the film. Why did you decide not to have Mia and Gianna kiss?

They do kiss! At the first party, in the red light.

Gianna especially is trapped by how she wants to be seen by others. Maybe she is actually more into girls than boys, but I thought it would only be after this story ends that she can freely explore this, without the male gaze.

But the friendship they have is very special. It is love, but love between true friends. 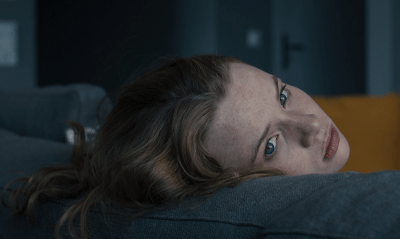 Mia is put in a lot of sexual situations throughout the film, yet I feel like the film doesn’t ask the audience to see Mia in a sexual way. What strategies did you use to show sexual situations without over sexualizing a young woman?

When I saw Luna acting I knew that I would spoil it if I decided to show more of her body. Why show a nude body if you have a brilliant young actress?

What messages do you want your film to convey about friendships between women?

Show your true colours – what makes you vulnerable can also be your power. And give each other room to grow, to evolve. Trust each other; trust that the other person can do everything!

What drives Mia’s need to fit in with this particular group of girls? We see a different girl offer Mia friendship at the beginning of the film, but Mia rejects it. What draws Mia to the popular group?

Mia feels attracted to these teenagers because they seem so free and wild – something Mia genuinely is, but cannot live yet. The more the story evolves, the more we see that those girls are not, in fact, free at all; they are trapped within the ideal of what women should be. They are not connected with their true nature.

We get a glimpse here and there: they need drugs to feel free, they need to control their weight and want to be sexy for others rather than to feel good in their bodies. Mia, by contrast, does experience [these things] at the end.

Most films that involve someone turning into a mermaid have the final transformation take place when the person finally jumps in the ocean. In Blue My Mind, Mia’s final transformation happens while she is still in her own home. This leads to a scene that I really like: Mia floods her home and we see her possessions floating in the water.

Is there a reason why you wanted her to become a full mermaid at home, as opposed to turning into a mermaid while in a body of water? Why have her home be the setting for this final transformation?

Yes, I just had this strong image of Mia, already transformed into a mermaid, in a messed up apartment. Something about this contrast fascinated me and it was one of the first images I had when I started to write the script. And then I thought: she needs to flood this apartment – her cage – and mess it up even more before she can finally break free.

I am from the United States and I have never been to Switzerland. I think the themes and events of Blue My Mind translate cross-culturally very easily, but I was wondering if there is anything about the film — either in the style of filmmaking or in the plot — that you feel really reflects Swiss culture or cinema? Is there anything you think will make audience say “Ah yes, this is definitely a Swiss film!”?

I didn’t initially sit down and think, “today I’m going to write a Swiss movie.” Of course, I grew up here and Zurich is a small city, but it’s a Western society and this influenced the story strongly.

I don’t think it’s that different from any Western society, but of course we have a lot of mountains here and no sea. So the longing for the sea, for the freedom away from all the systems, from all its perfectness is maybe very Swiss.

Blue My Mind is now available on VOD.

*Portions of this interview were edited.

One thought on “[Interview] ‘Blue My Mind’ Writer/Director Lisa Brühlmann”