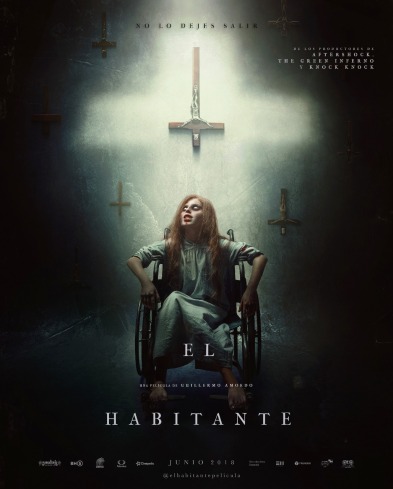 The Inhabitant (2017) (AKA El habitante) is a slow-burning Mexican-Chilean supernatural horror with a great deal of mystery and a fair amount of pathos. Written and directed by Guillermo Amoedo, The Inhabitant is a poignant and, at times, difficult exploration of abuse and trauma in a particularly religious context.

Three sisters, desperate to acquire cash in order to pay off the eldest’s gang debt, break into the house of a wealthy politician (Flavio Medina). A series of flashbacks reveal the grim childhood shared by the two older sisters (Vanesa Restrepo and María Evoli), who were raised in a strict Christian household and subjected to a series of domestic abuses that could carry a horror film themselves. But their ugly memories are not the only terror present in the film—during the robbery, they stumble upon an unexpected surprise.

Upon discovering the couple’s malnourished and sickly daughter (Natasha Cubria) restrained to a bed in the basement, they assume that she has been subjected to the same types of abuses they were and are determined to save her. Things are not that clear-cut, however, as the Senator and his wife (Gabriela de la Garza) warn the sisters that the young girl poses an incredible danger and the straightforward robbery begins to turn into a surreal and sinister nightmare. Confronted by their buried memories and weaponized secrets, the sisters are plunged into a deadly game with stakes higher than they could have imagined.

The Inhabitant isn’t always an easy watch (and possibly triggering for some), but its an interesting one. Bolstered by the fine cinematography by Erwin Jaquez and exceptional performances across the board, the film is unflinching in its treatment of its gritty (and grisly) subject matter. The film deals deftly with the issue of childhood abuse and the ramifications of trauma that follow even into adulthood; Vanesa Restrepo and María Evoli bring complicated emotionality to their roles, as do Liz Dieppa and Shira Barzilai, who play their younger versions. The film does falter a bit and resort to formula in its final minutes, but maintains its tension throughout the rest of the journey.