Short programs are a bit like anthologies: a loose collection of independent work that connect thematically or stylistically. In each collection, there is also typically a least a few bright spots and (just as often) a few clunkers.

I’m pleased to report that four out of five of the shorts in Slayed, the LGBT short program screening at Brooklyn Horror Film Festival, are good. Even the single entry that doesn’t quite stand up to the standard of the others isn’t bad per se.

The program is described as follows:

Representing the underrepresented, this collection of divinely crafted queer shorts mines chills from unexpected places, such as a close-minded church community, a sinister artist, and an erotically haunting dreamland, to explore connection and love through a horror lens.

Let’s break it down short by short:

Plot: “An unnerving exercise in folk horror, this shocking look at hidden truths follows a young member of an isolated church community whose deepest secret has tragic consequences.”

The first entry bodes well for the programming block. Ella (Molly Casey) is the young daughter of an intolerant Pastor (Grant Gillespie) who uses his platform to lambast homosexuals as deviant. After Ella’s smug brother John (Oliver Monaghan) discovers she is having an affair with Ava (Denise Stephenson), the town makes an example of the older woman, prompting Ella to take drastic action.

Director Puckett’s elegantly-shot short boldly eschews dialogue save for the titular sermon, which acts as a voice over monologue laid over the visuals. Perfectly paced and evocatively performed by Casey, The Sermon channels the imagery and period setting of the witch trials and other horror dedicated to religious hypocrisy. Bonus points for its nonchalant depiction of a May/December romance.

Plot: “Once depression takes a hold of Sarah, it’s impossible to let it go.”

Disposition tackles the unconventional topic of depression as its “monster” by focusing on Sarah (Sara Malakul Lane)’s struggles with her desire to self-harm. The short opens with a visit to her psychiatrist (Rob Elk), who barely makes eye contact while reading off the list of adverse side effects of her new antidepressant. The warning proves apt: in the nights and days that follow, Sarah experiences increasingly bloody and alarming visions that includes suicide and murder.

Eric Thirteen’s short is deeply traumatic and likely triggering for anyone suffering from depression. He wisely elects not to depict Sarah’s disease as a physical manifestation, simply allowing her dark thoughts to play out as reality. This is particularly effective the first time, and the use of flickering/dim lighting and cranking up the ominous score is very effective. Alas, Disposition loses its power following each successive traumatic experience and its understated ending is a bit muddled and not as powerful as it could have been. A solid entry, but not without a few flaws. 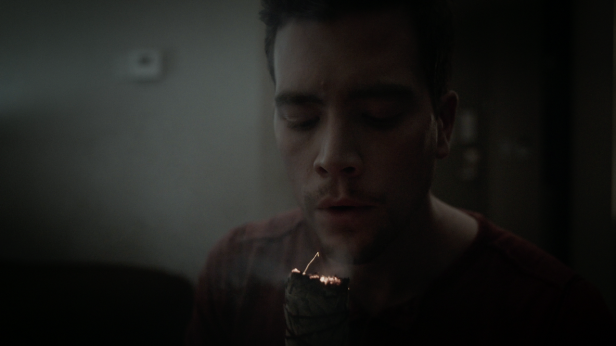 Plot: “Ten years after selling his soul, Kevin comes face to face with the demonic salesman. As it turns out, though, the demon has deeper feelings than Kevin realized.”

Payment is, unfortunately, the least effective short in the program. The first of only two gay-themed shorts, it is exceedingly simple: protagonist Kevin (Thomas McNamara) tries to ward off the arrival and advances of a demon associate (Jamal Douglas) who is contractually obliged to return him to hell.

Alas, there’s not much else going on. The brevity and slight budget is evidenced in both the setting (a single hotel room) and the plot, which is essentially a single long conversation. There simple isn’t enough here and despite the short run time, Payment feels overly drawn out and underwhelming.

Plot: “Isabella, a gallery owner who’s searching for love, is instantly attracted to Camila, a younger and seductive performance artist. But will art imitate life?”

Isabelle (Christine Kellogg-Darrin) is a secret painter who has inherited her notoriously ill-tempered late mother’s art gallery, which is playing host to brash and sultry performance artist Camila (Jordan Monaghan). Isabelle and Camila have a series of tense, erotically charged encounters surrounding Camila’s new piece, which involves bloodletting the younger artist before a volunteer showers her with her own blood. This leads to a confrontation that quickly becomes sexual and violent, culminating in an indelibly memorable final image.

Credit Arida and her production team for creating Instinct‘s clean, nearly sterile, aesthetic. It perfectly encapsulates the art world setting and Isabelle’s standoffish, distanced persona. Kellogg-Darrin plays Isabelle as a bit of an enigma, which is nicely complemented by Monaghan’s aggressive, direct Camila. The pair have great chemistry – as antagonists and lovers – and the entire short carries a palpable sense of uneasy tension.

The sly hints about Isabelle’s mother, her decision to keep her work hidden and the Countess Bathory-esque symbolism in both women’s art begs for a deeper exploration. The sign of a great short is when you want more of it, preferably extended to feature length, and that certainly describes my reaction to Instinct.

This short alone is worth the price of admission to the entire program.

So what makes Islands challenging and provocative? Not only does the short feature graphic sexuality and full frontal nudity, the loose narrative exists mostly to support the dream-like imagery rather than tell a coherent plot. Gonzalez’s short is reminiscent of the work of David Lynch, with its conflation of sex, sexuality and (occasionally) violence and the dialogue (delivered exclusively in the second section, but played out again in the third via audio recording) evokes the liminal space between waking and dreams, intercourse and love-making, and passion and violence.

Islands is sexy, surreal and, at times, even uncomfortable, but it is also captivating and mesmerizing. It won’t be for everyone, but is it daring and memorable. I’m certainly intrigued enough to move Gonzalez’s festival entry, Knife + Heart, further up my Must Watch list.

The Brooklyn Horror Film Festival runs from October 11-18, 2018. Tickets and information about the festival can be found here.