Professor Douglas E. Cowan has led a fascinating life. An ordained minister and scholar, Professor Cowan has devoted his much of his academic career to studying the sociology of religion. His doctoral work sought to understand the Christian countercult movement through propaganda theory and the sociology of knowledge. For years, he has been applying his religious and academic background to the study of genre film, penning insightful and thought-provoking books that explore the religious themes—both explicit and implicit—that are embedded in much of our popular entertainment. His work includes Sacred Space: The Quest for Transcendence in Science Fiction Film and Television (Baylor University Press, 2010),  Sacred Terror: Religion and Horror on the Silver Screen (Baylor University Press, 2016), and the introduction to Scared Sacred: Idolatry, Religion, and Worship in the Horror Film (House of Leaves, 2019).

Comprised of an intriguing and compelling blend of literary analysis and sociology, Professor Cowan’s latest book, America’s Dark Theologian: The Religious Imagination of Stephen King (2018, NYU Press) explores the way that Stephen King incorporates religious themes, imagery, and characters into his work. Drawing examples from a broad assortment of King’s novels and short stories, America’s Dark Theologian is an accessible and engaging look at not just the role of religion in horror fiction, but the roles of religion, myth, and skepticism in culture.

I was able to sit down with Professor Cowan recently to discuss his work, his background, the continual evolution of horror, and what the genre’s future may hold.

In addition to America’s Dark Theologian, you also wrote Sacred Terror: Religion and Horror on the Silver Screen (2008) and Sacred Space: The Quest for Transcendence in Science Fiction Film and Television (2010). What is it about genre film and literature that makes them such fertile territory for analyses focused on religion?

I think two things are central here. First, both genre literature and film are part of what I would call the “ocean of popular culture” in which we are all immersed. It’s around us all the time. It inflects how we see the world. And it sorts us into groups of fellow travelers. Think about all the conversations you’ve had that started, “Hey, Valeska, did you see the latest X movie? Or read so-and-so’s latest novel? Or, did you watch last night’s episode of insert-cliffhanger-television-show-here?” Now think about how left out you might feel if you haven’t seen or read or watched this. Put differently, popular culture—of which genre fiction is an incredibly important component—provides much of the common language of categories, symbols, and myths that allow us to navigate the world. Second, genre fiction is about fiction. That may seem obvious, but we cannot overstate the importance of story in our lives, both individually and socially. We live, culturally, by the stories we tell each other, we tell about each other, and we tell about others. Whether horror, science fiction, epic fantasy, romance, western, murder mystery—you name it—stories are like the water in millennia-deep well of shared cultural experience. And, for millennia, many of our most important stories have revolved around the gods and their interaction with us.

You say that “the mystery of death is the driving force behind both horror culture and religious belief” — do you think that the mystery of life is what drives a lot of science fiction?

I don’t know if I would put it quite that way, except to say that I think much of science fiction is based on a more hopeful version of the question “What if…?” than horror. Not that there isn’t a rich trove of dystopic sci-fi, nor fabulous hybrids of science fiction and horror, but many of these are speculative versions of what happens if what we hope for goes wrong. Victor Frankenstein tries to solve the riddle of death and winds up creating a horrific simulacrum of life. Revival, Stephen King’s nod to Mary Shelley’s masterpiece, follows the same question: what happens when we die? And what his character Charlie Jacobs discovers beyond the veil is terrifying indeed. Science fiction, though, is what I consider the preeminent vocabulary of transcendence. Not transcendence as religious believers often use the term, but in the sense of going beyond, moving past, transcending limitations. As a species, we are never satisfied living with the shadows dancing on the walls of Plato’s cave, and our varied quests for transcendence are often the direct result of being told, as the enigmatic Q says to Captain Picard in the pilot episode of Star Trek: The Next Generation, “Go back or you will certainly die!”

King’s prolific output and the rich intertexuality of his novels make him an ideal subject for this sort of study and America’s Dark Theologian reads as though written by a true fan. Have his books been a big part of your life? Did you read a lot of genre fiction growing up?

They haven’t, though I know that they have been a huge part of life for millions of other people. I was much more of a science fiction and fantasy geek growing up, and read virtually everything my small town library had. But when I came to think more and more about the “ocean of popular culture” of which horror forms a significant part—that is, when I started to write Sacred Terror—I wondered what such a prolific author as King could tell us about the perennial questions we ask. We often think of these as “religious questions”—Where do we come from? Why is there suffering? What happens when we die? Does life have any purpose?—but they aren’t. And that’s important to realize. Religions have certainly claimed to answer them, but these are what I call “properly human questions.” That is, they are the questions we ask because we are human, not because we are religious. I think this is what I enjoyed most about reading King’s work: that he doesn’t propose to answer these questions. Rather, he continually questions the answers we claim to have found. As a body of work, his fiction highlights the reality that however much we think we know about the ways things work is dwarfed to insignificance by what we don’t know.

As a King fan, I found your analyses of his work fascinating, but some of the most compelling work in America’s Dark Theologian is in the sections dealing with religious socialization. What drives your interest in this subject?

As a sociologist, I’m primarily interested in how people form beliefs about things, how groups form around similar sets of beliefs, and how these groups maintain their beliefs in the face of contradiction, challenge, and outright disconfirmation. As I think about horror, science fiction, fantasy—and you could certainly extend this, for instance, to such genres as romance, mystery, and military thrillers—I am more and more struck by how powerful story is as a motivator for group behavior and solidarity. We are socialized through story. That is, we are taught the norms and expectations of our particular group through the stories we are told as children, and those we pass on to our own offspring. And that includes, most importantly, religious stories. Which is to say, religious beliefs are not based on fact—no matter what ardent believers say. They are based on the multitude of stories we have told about how we think things work in the world.

What I find particularly compelling in King’s work are the number of times religious socialization goes wrong, when it produces precisely the opposite result to what it intends. A quintessential example of this is Jack Torrance’s experience of Roman Catholic catechism class in The Shining. 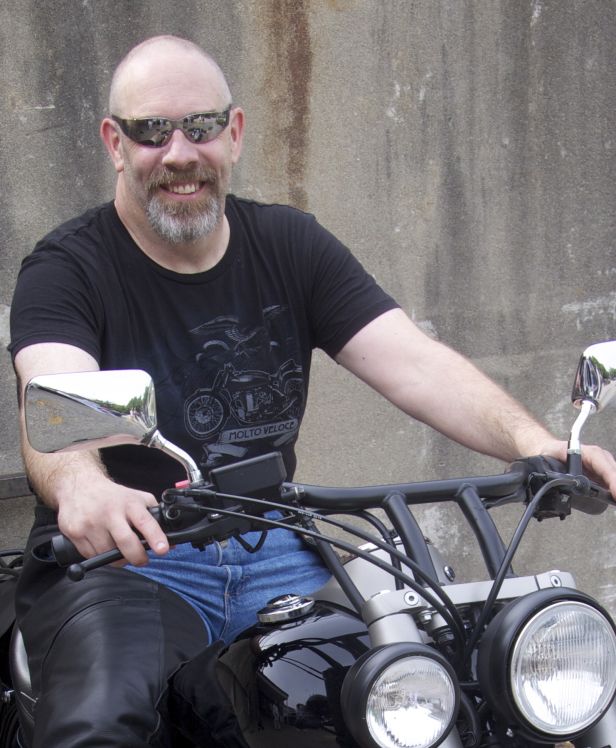 You’ve led an intriguing life: you were ordained as a minister in the United Church of Canada, have taught a course on Atheism, Skepticism, and Free Thought, and your doctoral work critiqued the Christian Countercult movement (and got some pushback from online Christian communities). How does your background inform the way that you approached this book and pop culture in general?

I think, more than anything, it gives me an eclectic approach to popular culture, in the sense that I don’t try to bend it to be one thing or another. One thing that interests me, which I’ve written about in both Sacred Space and Magic, Monsters, and Make-Believe Heroes, a book on fantasy culture that’s due out in January, is the way in which religious believers seek to “baptize” a wide variety of pop cultural products to serve their own particular faith ends. That is, by mapping their own beliefs onto, say, horror or science fiction, they can bend these stories to their religious will. Consider the number of books you might have seen entitled, in one way or another, The Gospel According to Insert Title Here. This is a huge part of the process of religious socialization. If believers can make Star Wars or Harry Potter or Hammer studios horror about the Christian gospel, then they make it palatable for their particular group. It confirms their beliefs, rather than challenges them—and challenge is what Stephen King’s work is all about.

Were there any sections in this book that you found particularly challenging to write? Or particularly satisfying?

Rather than particularly challenging, the most difficult part of the book was the decision to leave out King’s works of epic fantasy, particularly The Dark Tower, which he himself considers his magnum opus. Because I chose to focus on his horror fiction, his “scary stories,” as the woman in the Sarasota supermarket says, there simply wasn’t room to include discussion of The Dark Tower. What I hope from this book, though, is that readers will find enough in it to use as an invitation to look at their own favorite stories in a new light. That is, I want it to be an invitation rather than a foreclosure. Readers should be skeptical of books that claim to be “the complete guide” to anything, and I’m certainly not making that claim. Readers, though, could take the way I talk about socialization, and use it to enrich their understanding of or appreciation for, say, Harry Potter, which is, as much as anything, about the British public school experience. They could take the chapter on ritual and use it to explore religiously motivated killings in any number of murder mystery stories.

In the chapter “Thin Spots: What Peeks Through the Cracks in the World,” you talk about the importance of understanding historical context when analyzing novels or films, particularly when it comes to horror texts which tap into cultural fears. We’ve entered into a turbulent new era, politically and ideologically — how do you think these circumstances will shape horror fiction going forward?

At the risk of speculating, and this may be the result of my own bias, I can see much more sociologically informed horror and science fiction. That is, rather than nuclear monsters such as Godzilla (though who doesn’t love a good Godzilla movie?) or alien invasion films (which are often thin cover for fears of this or that country taking over), I think the incredible uncertainty of the current situation, the speed with which our models of the world are changing—and our resistance to that change—will drive some fascinating new stories in the future. Though it’s not as though we haven’t asked these questions before. As a sort of companion volume to America’s Dark Theologian, I am currently working on America’s Reluctant Prophet: The Nightmare Visions of Philip K. Dick, which takes a similar approach to one of the most influential science fiction writers of the twentieth century, and whose work is explicitly sociological in nature.

America’s Dark Theologian: The Religious Imagination of Stephen King is available for purchase here. The crowdfunding campaign for Scared Sacred: Idolatry, Religion, and Worship in the Horror Film runs until November 2018.