Guest contributor: Ali Chappell is a writer, personality, and actor who holds a degree in both business and musical theatre. She is skilled in the art of balancing spoons on her face and, after three drinks, is really good at throwing axes. She is obsessed with horror and romcoms and can often be found in a movie theatre with a glass of gin and bag of popcorn. Follow her on twitter and Instagram at @thealichappell.

Jean-Paul Gaultier is a stunning example of one man’s quest to make the world a beautiful and vibrant place to live in. From the runways in Paris where his models walked in haute couture to Madonna’s Blonde Ambition tour where he designed the iconic cone bra that we all remember so fondly. Gaultier, a dedicated member of the LGBT community, took to fashion with a fierce passion. He showed the world that not everyone is a size 2 and that being different can mean being revolutionary. Gaultier understood that fashion was meant for everyone — he chose his models based on an inclusive vision (different ethnic backgrounds, different body shapes, and a range of sizes). He refused to be beholden to the original high-fashion cookie-cutter form.

In addition to his runway shows, he also lent his talents to the silver screen.

Luc Besson’s The Fifth Element (1997) recently turned 21 years old, and we are still not over the fashion displayed in this sci-fi fantasy film. The designer of over 1000 costumes for this production? None other than Jean-Paul Gaultier. To create a wardrobe for an entire planet took months of hard work and a great deal of determination; this was an incredibly ambitious project. He created outfits not only for the leads and the supporting characters, but for every single one of the extras inhabiting this fantastic new world. 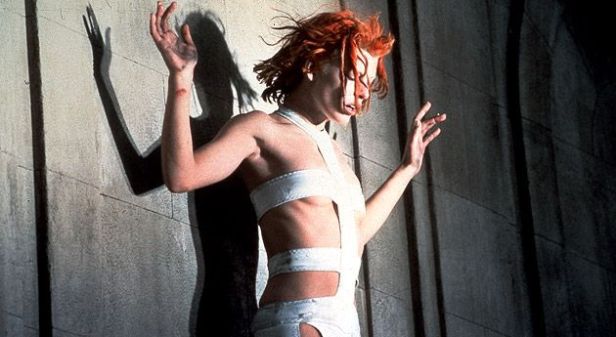 Mila Jovovich, who happened to be a supermodel at the time and plays the lead character Lee Loo, dons a white bandage one-piece in her birth scene. It’s basically a bathing suit that makes her look as though she is wrapped in toilet paper, but on her it works. She is born. She evolves into her signature light brown pants, off-white crop top, and those iconic orange dungarees. These outfits, compared to the rest of the costuming in this film, aren’t feminine. In them, Lee Loo leans more towards being a tomboy, unlike the other uniquely-dressed women. Lee Loo is tough as nails, she’s fearless. 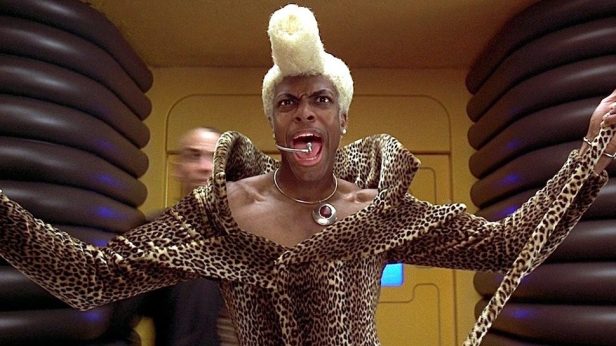 Chris Tucker, who plays a Prince-esque rockstar, probably has the most interesting outfit in the whole film. He wears a leopard-print velvet bodysuit with a wide-brim neckline, his hair coiffed into a blond mini-afro with a tube-shaped appendage. The look is animalistic, which matches his character perfectly. 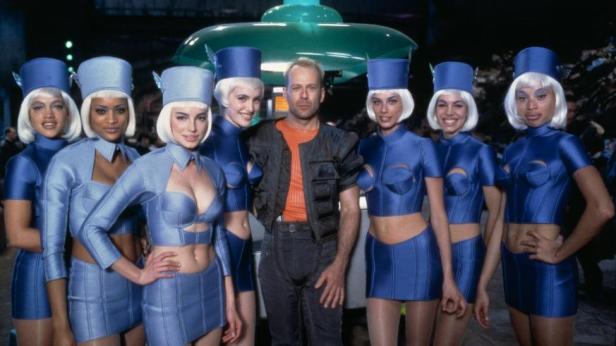 Even the lesser roles have the most amazing (and cosplay-able) costumes. The airline stewardesses are scantily clad in blue two-piece suits made up of miniskirts and daring tops. The matching pillbox hats and boots evoke retro class and sexiness. The red corsets with the golden arch sweetheart necklines worn by the futuristic McDonalds workers are sheer perfection. Why McDonald’s hasn’t changed their uniforms to this is beyond me. I would work there if those were the uniforms. 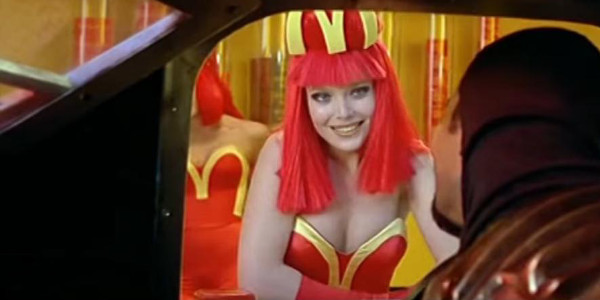 Jean-Paul Gaultier is beyond fashion. He created an entire world’s worth of a fashion language that only existed in his mind, but somehow we all understand it. His work has inspired fashion houses including Alexander McQueen, Moschino, and DKNY. His design work breathed life into The Fifth Element and is one of the main reasons it remains stylish and timeless. As Luc Besson, the director of the film, once said “I wanted the best and that is Jean-Paul. He knows the color, he knows the flavor of New York.”