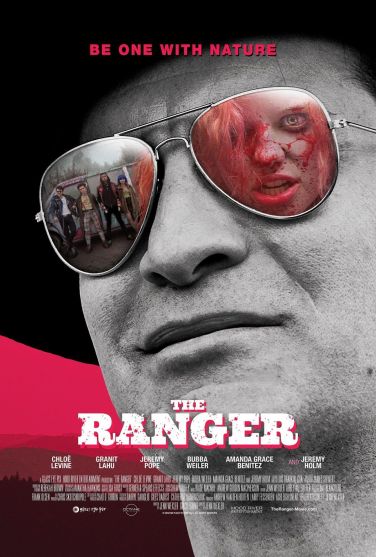 The Ranger was one of the five female-directed films at Fantasia that I was hoping to see at the festival. (I also managed to see Blue My Mind, an experience that will linger in my psyche forevermore, and will be reviewing Tigers Are Not Afraid within the next few days.)

At first blush, The Ranger seems to be a straightforward, punk-tinged slasher — and, for the first two acts, that’s exactly what it is. But as the film progresses, family secrets deepen and complicate the narrative and our understanding of the characters. Though The Ranger is her first feature film as a director, Jenn Wexler’s producer credits include last year’s Most Beautiful Island and Psychopaths, the  “N” segment in 2014’s ABCs of Death 2, as well as Mickey Keating’s gorgeous, black-and-white, psychological horror gem Darling (2015). With The Ranger, Wexler dips into nostalgia, creating a 1980s slashback feature that combines a few of the era’s main tropes — a cabin in the woods, an absurd villain, and a group of hapless victims of whom you can’t wait to be rid.

The story centres on a young, pink-tressed punk named Chelsea (Chloe Levine of The Defenders), who seems far too intelligent and sensitive to be spending her time with the exceedingly obnoxious Abe (Bubba Weiler, looking all kinds of young David Tennant), Amber (Amanda Grace Benitez), and Jerk (Jeremy Pope), to say nothing of her terrible boyfriend Garth (Granit Lahu). As you can imagine from the review thus far, the group does little to arouse the audience’s sympathies or goodwill throughout the first act of the film, which focuses on their flight from the city after Garth murders a police officer during a drug raid at their favourite underground club. When Chelsea reluctantly agrees to let the gang hide away in her deceased uncle’s remote cabin, they head out into the wilderness. A quick stop at a gas station to acquire some supplies (five finger discount, naturally) leads to a chance encounter with someone from Chelsea’s past — the Ranger (Mr Robot’s Jeremy Holm), a dour man obsessed with the “laws of nature” who is all too eager to supply the requisite warning before the teens head into the woods.

Almost immediately upon arriving at the cabin, Chelsea’s friends demonstrate a total lack of respect for both the cabin and the woods. Chelsea steps away for a brief time to reconnect with the forest, and returns to find the trees surrounding the cabin either tagged or aflame.

As you can imagine, things don’t exactly go well for the group after that.

I’ll avoid any blatant spoilers, but suffice it to say that several obnoxious teens get their comeuppance, a backstory turns out to be more complicated than anticipated, and the soundtrack is slammin’. Unlike the 80s slashers that The Ranger references, the film is free of gratuitous nudity and sexism, which is a definite plus for me. It’s also surprisingly low on the sort of graphic violence you usually expect on this sort of journey, though it goes full-bore on the gore it does include (there is a great foot-related scene when the proverbial shit hits the fan that will likely garner some groans and laughter). The Ranger gets bonus queer points for prominently featuring the very tender and sweet relationship between Abe and Jerk (really, the only likeable aspect of the characters).

The performances work well enough, the standout being Ms. Levine. Holm’s Ranger is a little difficult to pin down — at times, a preposterous and comedic near-caricature of a stiff action villain, and at other times, menacing in a more traditional horror manner. These shifts result in the film’s uneven tone. While I did find the more restrained performance interesting, I’d have liked to see the film lean harder into horror-comedy by pushing the envelope with the Ranger’s absurdity. The ridiculous one-liners and deadpan delivery are where the film shines the brightest and elicits the most reaction — had The Ranger pushed further into that territory, it could have become a cult hit and a perfect film to watch in theatres with a rowdy and engaged crowd. With that in mind, I very much look forward to seeing Jenn Wexler’s next feature.