Also known as Pokot, 2017’s Spoor is as much a mystery as it is a sprawling (and, at times, distracted) character study – not only of our protagonist, but of the character of small-town Polish life. A village in the remote Polish mountainside is plagued by a series of inexplicable and violent murders, spread out over a series of hunting seasons. The victims? All avid hunters who have previously clashed with Janina Duszejko (Agnieszka Mandat-Grabka), an elderly woman and outspoken animal rights activist who struggles to find a sympathetic ear in a town deeply bonded to its hunting traditions. As the bodies continue to pile up, Duszejko becomes convinced that she knows who is responsible – but no one will believe her when she points her finger at the unlikely culprits. 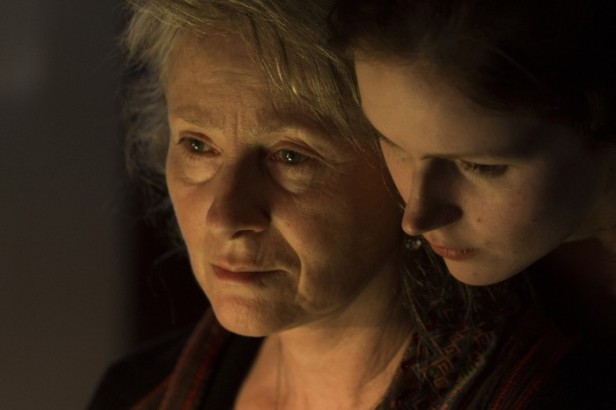 Directed by Agnieszka Holland (In Darkness), Spoor is a slow, quiet watch – the story trickles like molasses, leisurely and deliberately, parceling out small clues and insights sparingly while immersing the audience generously in the quotidian textures of rural Polish life. Holland’s use of brief, vividly saturated flashbacks to glean insight into character motivations and back story is very effective, as is Jolanta Dylewska’s gorgeous cinematography which underscores the wild melancholy of the setting. The use of extreme close-ups during several key conflicts works to reinforce a theme of connection and sameness between humans and animals, a theme that is echoed throughout the film via Duszejko’s desperate attempts to ban hunting around her village. Corruption, both governmental and religious, is another theme that features strongly throughout the narrative – this is not surprising as Holland has a long history of political film-making in her native Poland.

Mandat-Grabka’s performance as Duszejko is extraordinarily sympathetic, even as the character grows increasingly obsessive and borderline unhinged. Mandat-Grabka imbues Duszejko with a commanding yet vulnerable presence; a kind vulnerability matched with a ferocious determination. The supporting cast is uniformly solid. Wiktor Zborowski is excellent as Matoga, Duszejko’s isolated neighbour who carries a tragic secret. Patrycja Volny turns in a subtle performance as Dobra Nowina (“Good News”), the local shop girl who is trapped in an abusive relationship and yearns to find a level of stability that will allow her to save her younger brother from a dangerous family environment. Jakub Gierszal is extraordinary as the baby-faced IT wizard who struggles with his epilepsy and takes on an undercover role at the village police department. This core group of characters and their interactions are the strong emotional core of the film, and their emerging relationships are more crucial to the film’s success than the strength of the mystery, which is often relegated to the background.

While the story meanders in ways that seem to lose track of its core thread, several tangents play satisfying roles in the final reveal. On the other hand, the film does raise questions which it then neglects to answer, introducing various (often compelling) threads before seemingly forgetting all about them. The outstanding character work can only go so far in making up for the faults in the story. While I did love the film, I left the theatre nursing a small dissatisfaction with several aspects of the plotting and wishing that Holland and Olga Tokarczuk’s screenplay had done a better job of fleshing out these potentially meaty developments.

This film isn’t for everyone – it lives and dies by the patience of its audience and their willingness to prioritize character development that seems at times incidental to the story. But it’s worth the effort – in Spoor, Agnieszka Holland has created a strange, beautiful, and powerfully evocative film.