If you’re a horror fan and unfamiliar with Shudder, you are truly missing out. Shudder is a subscription horror streaming service that offers cult classic films, hard-to-find foreign films, series, and much more. The service has recently added exclusive Shudder-only content and is planning to feature original content. Shudder is available in the US, Canada, and UK/Ireland. Let me make it clear that I have not been asked by anyone to promote Shudder. I’ve been a subscriber since 2015 and I love it so much that I haven’t stopped talking about it.

I’ll return in the future with posts about more of my favorite Shudder finds. Today, I want to share Show Pieces (2015), a film I recently discovered. I was completely blown away by it and left feeling rattled in the most wonderful way.

Show Pieces is a three-part anthology, written by Alan Moore (known for V For Vendetta, From Hell, and Watchmen) and directed by Mitch Jenkins. The anthology is actually made up of three short films, brilliantly stitched together exclusively for Shudder. Show Pieces paints a disturbing but beautiful portrait of death and what happens to our two protagonists, Faith and Jimmy, in the afterlife. The haunting soundtrack for the film features original lyrics also written by Moore.

In the first part, Act of Faith, we are introduced to Faith (Siobhan Hewlett), a young, pretty blonde who seems to be successful, but also has a dark side. Faith puts on a flowing gold dress and engages in an autoerotic act in her bedroom closet that is both scintillatingly shot and physically agonizing to watch.  The scene is unexpected and, as uncomfortable as it made me, I couldn’t look away. 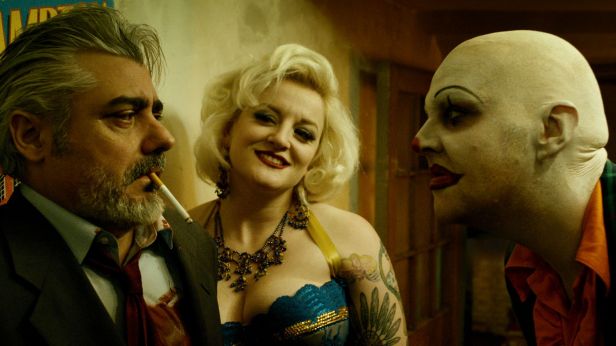 In Part two,  Jimmy’s End, we meet Jimmy (Darrell D’Silva), a womanizing alcoholic. Jimmy has too much to drink one night and ends up in the same bizarre purgatory where Faith is trapped. Although Faith seems to have figured it out by the time Jimmy arrives, he has no idea what has happened to him and thinks he’s lost. They are in the basement of a nightclub filled with strippers and a cast of shady characters, including a creepy clown and the club’s mysterious owner Matchbright. In this nightmare world, the women are heavily made up and tattooed and couples dance to dreamlike music in somber silence. In my opinion, the best part of Show Pieces is Robert, AKA ‘Bobbles the Clown’ (Andrew Buckley). Jimmy meets Bobbles as he’s telling terrible jokes to a stripper, who is laughing maniacally, and asks him for directions.

In the third and final part, His Heavy Heart, it becomes painfully clear to Jimmy that the only directions Bobbles is going to give him are the directions straight to hell. Bobbles and a stripper (Khandie Khisses) corner Jimmy and try to convince him of the seriousness of his situation. In a darkly hilarious scene, Bobbles reads from the Egyptian Book of the Dead and translates it for Jimmy to reveal his terrifying fate.

Among other things, Show Pieces has been compared to the work of David Lynch. I’m a huge fan of Lynch, but this anthology is unlike anything I’ve ever seen before and succeeds at being dizzily horrifying, but also mesmerizing at the same time. Despite originally existing as separate short films, the stories weave perfectly together to produce one of the most fantastically imaginative, visually and psychologically terrifying films I’ve seen in recent years.

If you’re interested in checking out Shudder’s catalogue and subscription information, you can visit Shudder.